Snow Tires for the Ural 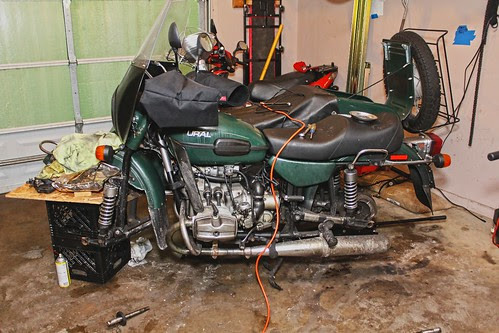 I turned over 15,000km on the Ural last weekend and decided to do some maintenance. Little did I know it would turn into a multi-day ordeal at no fault of the Ural.

I started out with the idea of just changing the fluids and checking things out. I saw my K37s sitting in the corner STILL waiting to go on. This season has been very wimpy in temps and snow, so I didn’t mount them yet. I also wanted to see how the Duros did in the snow. Maybe a touch of laziness too! hehe 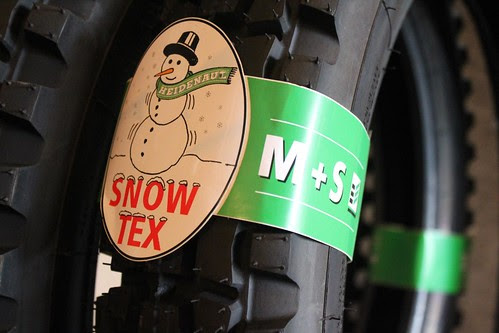 I thought I should start the oil change by removing the tires. They could sit in the house and get warmed up while I let the fluids get started dripping out. Then things took a turn.

I got the Ural up on jack stands all the way around, so I could remove all three tires. The two rears were very easy. The front is a little more tricky since the axle is reverse threaded, and two bolts holding the brake caliper need to be removed. The caliper was comfortable where it was and didn’t want to come off. The first bolt came out nice and easy, but the second one came out about 1/3 and stopped. Ugh!! Déjà vu anyone?

I EVENTUALLY got the new tires on. Duro on the left, K37 snowtex on the right. The K37s are about an inch taller, so I had to jack the rear up with a floor jack to get them on. The center stand wasn’t tall enough. I do carry a jack in the trunk for roadside changes. 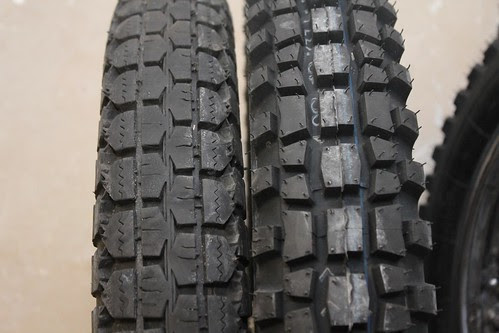 I need more time to evaluate the K37s. My initial impression is they are squirmy. This makes sense since they are made of big blocks of soft, winter-friendly rubber.