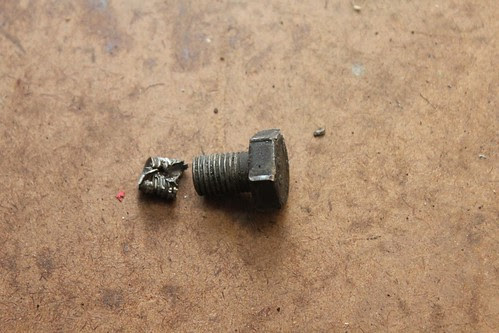 In my last post, I mentioned I was changing the Urals tires, but it didn’t go very smoothly. One of the mounting bolts for the front caliper got stuck about a 1/3 of the way out.

As I was removing the bolt with my trusty wrench it started to get looser and then tighter. I stopped. I didn’t want another broken bolt. The last one took way to long to fix, but since that adventure I have lots of tools to remove broken fasteners.

I tried to tighten it and it got tight that way too. I reached for the impact gun instead. It just sat there hammering away for a minute and then “whirrrrrrrr….” The gun spun like it had removed the bolt. I was relieved until I moved and saw a shorter bolt fall out of the socket with a little nub still sticking out of the caliper.

(this is actually close to what I said, but I’ll let you use your imagination.)

Time for a break. hah!

I asked my wife for a ride to the hardware store since it was a bit snowy for the scooter. I bought some new stainless steel bolts to replace the regular one. I bought two M10x35x1.25 for the caliper mounts along with new washers. I also picked up two new M10x45x1 bolts along with associated nuts and washers for the front and rear axle pinch bolts. Might as well replace them since I had them off and I was already at the store.

New and Old below: 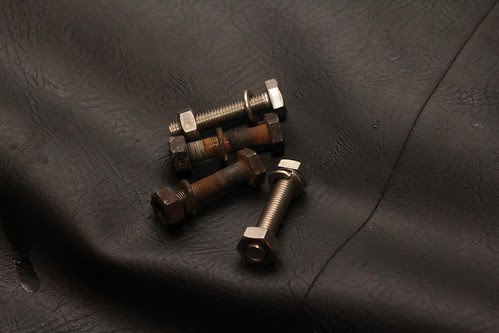 Now, back to that caliper. I tried using my bolt extractor tools while the caliper was still connected to the bike. It quickly became clear it wasn’t going to be easy, so I removed it from the bike. I needed to change the brake fluid anyways.

Gun-shy from my last stuck bolt in a caliper, I asked for help before I made things worse with my inexperience removing stuck fasteners.

My step-dad to the rescue. He has many years of experience working with stuck metal. His hobby is restoring antique tractors. He frequently has to find ways to fix or make parts since they can not be purchased.

Since the caliper is aluminum, we just used a little bit of heat to try and expand the threads. Used improperly, this torch could melt the entire caliper! I did the smart thing, and just took pictures. Leave that to the experts. 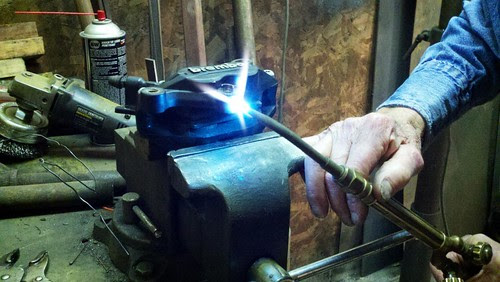 The little nub still wasn’t going anywhere, so we ground it off. It was pretty deformed by this point. 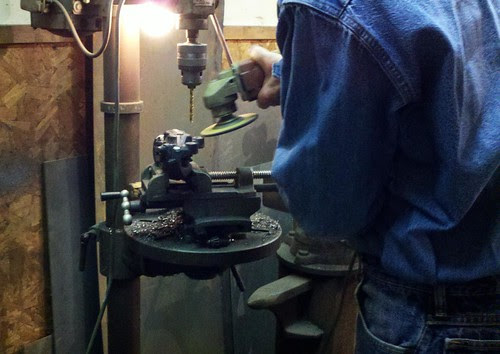 Then we carefully drilled out the center of the bolt all the way through. We got lucky that the hole for the bolt goes through the caliper. 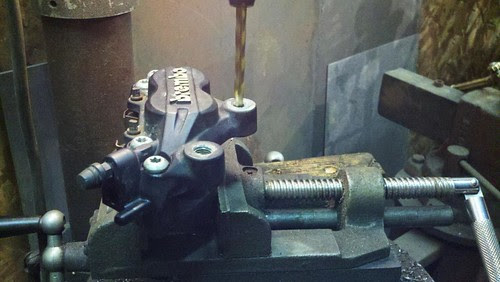 Then we took turns carefully filling by hand with a rat tail file until the bolt was paper thin. It was a persistent beast and didn’t want to come out. We carefully tapped it with a finely ground center punch pulling at the edges. It started to collapse and come out.

The threads were a bit messy afterwards, so we cleaned them up. I was amazed when I could thread the new bolt in by hand all the way to stop. We spent two hours start to finish removing the bolt, and it saved me ordering a new caliper from WA (or maybe Russia). I’m very grateful for the experienced assistance. I couldn’t have done it myself. 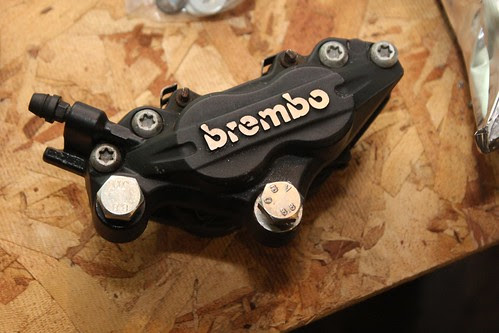 With the caliper fixed, I went back to mounting the tires, so I could put them back on the bike and bleed the brake. The adventure isn’t over yet…