Zip Ties Save the Day

Sunday was the nicest day in the last week. The temps were in the mid 50Fs and the sky was mostly clear. It has rained for almost a week, and next week isn’t looking good either. So what do you do with a nice day on a weekend after a week of rain? Mow the lawn of course! It was horrible, but it needed it. People don’t seem to like six inch long grass.

After mowing, my wife went out for a long ride to break our new tires in. We rode east on 96 to Stillwater and then south on 95. We crossed over into Wisconsin at Hudson and rode up to Taylors Falls where we crossed back over to MN.

From Taylors Falls, we headed south on 95 again with the plan to follow 95 all the way back to 96 to make a large loop. We had to make a left turn to stay on 95. I made the turn quickly, but my wife wasn’t so brave and waited. I pulled over on the side of the road and waited. I kept watch with my left mirror. I looked up to wave to another motorcycle. When I looked back, I didn’t see her!

I turned around and saw her laying on the ground with her bike. $#!&!!! I made a very fast u-turn and flung the SV forward. The new tires have a lot of grip!

As I approached I saw this:

I helped her pick the bike up and we moved it to the side of the road. The cars just sat there waiting.

She was ok. Just a bruised hand and a really bruised ego.

Upon closer inspection of the bike, we found a bent turn signal and this: a broken clutch lever. 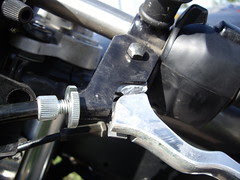 We pulled off the seat to get the stock tool kit, but there doesn’t seem to be one. Luckily, I have a ton of tools and some spares on my bike including a clutch lever.

The cars were flying by and not very friendly about us being stopped on the side of the road. One of them actually clipped my bike and bent my mirror. GRR! Nothing broken, just need to tighten it back up.

Unfortunately, the clutch lever is for a SV650 which does NOT fit on a GS500. With a ziptie, I was able to make it mostly work. 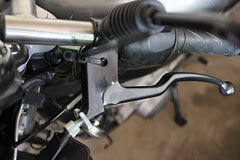 We started riding the 50 miles home. She killed it a few times because of the funky clutch action, but we made it home.

Other than the dropped bike, we had a good time. We put in about 175 miles and enjoyed some really nice weather and scenery along the rivers. She was really depressed when we got home. I took her for a ride on the back of the SV, and bought her dinner which helped a lot.

She's not sure exactly what happened. She said she lost balance while initiating the turn which likely caused her to drop it. I've seen her do this before. The last time she fell, she killed it which caused the bike to leap putting her off balance.

She said she's going to spend the rest of this week's nights in a parking lot practicing. We'll get two new clutch levers, a brake lever, and an aftermarket tool kit for the GS500. She really wants to get back on the bike again ASAP.
Chris at 6:29 AM
Share