I saw on Facebook this morning that one of the local motorcycle dealers was having an open house that included a stunt show. my wife and I always enjoy watching shows, so we set off. 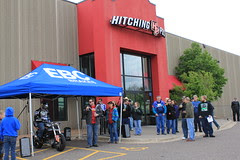 The weather has been less than ideal this week. It has rainy, windy, and in the 50Fs all week. When I work up this morning it was 37F, and I heard it had snowed over night. I didn’t see any snow, so it didn’t happen!

While we were waiting for the show to start it tried to rain and even hailed slightly, so we retreated inside to drool on bikes. The show started at 12:15 instead of noon because of the weather. 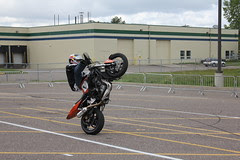 Aaron Colton is a local Minnesota motorcycle freestyle rider aka stunt rider that has been doing stunts since he was 13. I’ve seen a few of his shows and they have all been great. He is 18 now, and he’s a professional rider competing at the top level. He does stunts, road racings, and super moto. I think I even saw him at an ice race earlier this year. 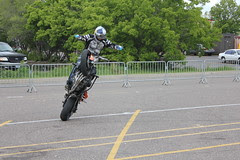 He did two shows today. We caught the first show, but missed the second. After the first show, Aaron hung out and signed autographs. Both my wife and I got a picture of him signed. Nice! 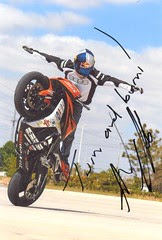