Uraling in the Snow – December 8 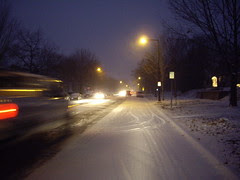 While I was working, it started to snow. There was only about two inches on the road, but there was also lots of ice under the snow.

I was quite excited to finally ride the Ural in the snow, but at the same time I was nervous the other road users wouldn’t be as alert or excited as me.

I had little excitement as I crept out of downtown St. Paul with the wall to wall cars. I started in 1WD which served me well for about the first mile or two. Then the snow was deeper and I was encountering more ice at the intersections. After the second time of barely making it through an intersection, I stopped and engaged the 2WD by flipping the lever.

Wow! 2WD is like AWD in a car. Amazing amount of forward ability, so much so, that I was able to break the front wheel free and just push it sideways. With 2WD engaged, it also pulled quite strong to the left which made my shoulder pretty tired by the time I got home.

It only took me about 10 minutes longer than usual to get home on the tertiary roads. The temperature was around 19F, so not very cold yet.

Here are some pictures I took of the Ural under a street light with various settings (night, flash, auto): 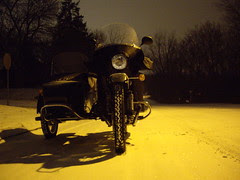 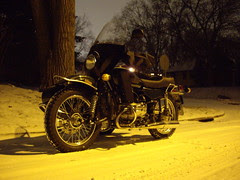 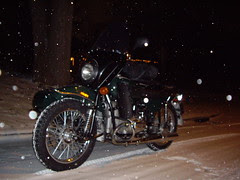 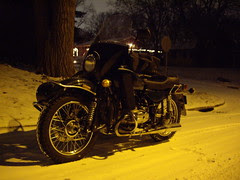 I’m sure I was the only one who enjoyed the commute home. I had a grin on my face the whole way. There is more snow predicted for Wednesday too!