Just this weekend, I was telling a friend how amazing it was that I hadn’t had a flat tire in 2009. This weekend I also purchased a tire repair kit for my SV650 (the ural has a spare tire onboard and the WR250R has a set of spare tubes).
This afternoon a couple co-workers came over to my cube and let me know my rear tire was a bit low and that I should check it out. When I got outside, the rear tire was completely flat. 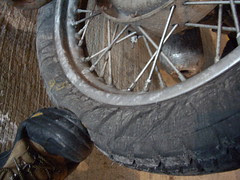 Instead of being upset, I was actually excited to change the tire! I was too eager to change it, and I forgot to take a picture until after the tire was nearly off. I watched the maintenance videos last week and felt confident I could do it. I grabbed the manual and read the page through again on changing tires. I also watched the video again on my phone; it seemed easy.
I first tried the Ural air pump to just put air in the tire thinking, somehow, it had leaked out. This is when I also had my first RPOC moment… the tire pump didn’t fit on the tire correctly and it wouldn’t lock in and just leaked air instead. 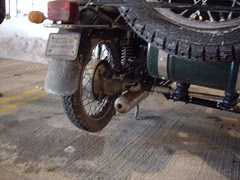 Lets see, step one in the manual is “lift the motorcycle onto the center stand.” The center stand doesn’t have a nice lever to hold with your foot. I wasn’t strong/smart enough to figure it out, so I grabbed two co-workers to help me lift the bike onto the stand.

I set about removing the cotter pin with the supplied pliers, and then took the axle nut off. So far so good. When I got over to the other side, I found I needed two 17mm wrenches to remove the axle pinch bolt. 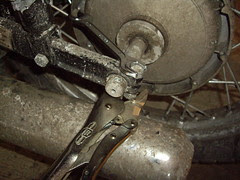 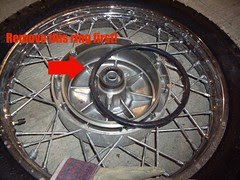 After I removed the pinch bolt, removing the axle was easy. The tire also came out rather easily. It took another check in the manual to figure out I needed a special tool (in the kit) to remove the spare. Spare removed, I tried to mount it on the bike, but it wouldn’t fit. I tried for a while and then took it out to compare the two tires.
That’s when I noticed the black plastic ring on the inside on the spare… I removed that and it went right on. The rest was pretty easy. Re-inserting the cotter pin was slightly annoying.. apparently they work better when completely straight.. who knew? Inserting the cotter pin before tightening the axle pinch bolt makes things easy too. 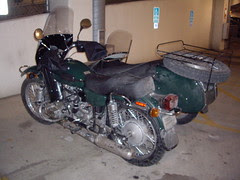 I put the tools away and went back inside to put my gear on. I stopped by Sears on the way home and purchased some extra tools to make the next tire change a bit easier. 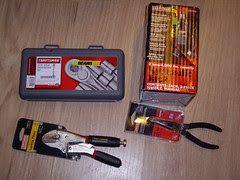 1) a pair of needle nose pliers
2) a pair of vice grips
3) a small bottle jack
4) a metric socket set (with a 17mm)
I also put my bike pump into the tug (sidecar) until I can buy a smaller one that fits in the trunk. I also need to add a light of some sort. A 12V light with a cigarette adapter would be perfect.
When I got home, filled up the flat tire to 40psi, and am currently waiting for it to go flat again. I can’t find any nails or anything else wrong with the tire, and I can’t hear any hissing. I’m stumped. I might just replace the tube with a heavy duty tube for good measure and call it done.
The ride in was very comfortable with my new heated gloves despite it being 2F. The ride home was also nice with a 500% increase in temps (10F)! I’m happy I had the opportunity to learn in the parking ramp rather than on the side of the road. I’m also very thankful to have such helpful co-workers!

UPDATE: I found the problem with the tube. The tube was pinched by the spoke bolts.
Chris at 6:47 PM
Share