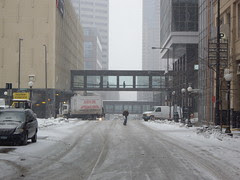 It didn’t feel very cold this morning, but apparently it was 12F. The new gloves were working very well. They were working so well, that I nearly got a slight burn on the back of my hand. I think I had them on for only a few minutes at a time. I plan on investing in an actual dual-temp controller versus the on-off switch I have now at the Motorcycle Show in Feb.

I took these photos of downtown St. Paul, MN during my lunchtime walk. It was snowing slightly with just under an inch of snow (about 2cm). The first photo is looking east on East 5th Street with a couple of the skyways visible. 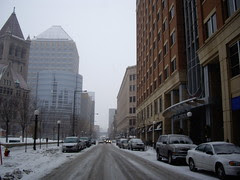 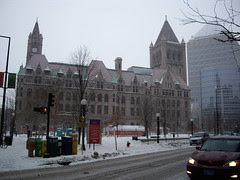 Landmark Center with a small park on St. Peter St. The park has a temporary free ice skating rink setup which was surprisingly busy for a weekday. 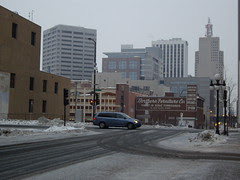 The Ural is working great, but I still need to buy a new tube. The one that failed has a slow leak; it looses all of it’s air in about 8 hours. I also learned that the axle pinch bolt is supposed to be a 14mm/17mm combination and not a 17mm/17mm; I’m guessing when it was assembled someone made a mistake.

I also practiced changing the tire a few more times and greased up the axle at home. It only takes me about 15-20 minutes now instead of an hour.

Thanks to Charlie6’s advice, I can now put the Ural on the center stand by myself too. Thanks! Taking the 100lbs of sand out of the tug makes it much easier to get on the stand too. :)