Riding Around Minneapolis at Sunset

Last weekend we the weather was nice enough for a motorcycle ride. It was a busy day, but we managed to get out just before sunset started. It was a short one hour ride, but we both really enjoyed it. 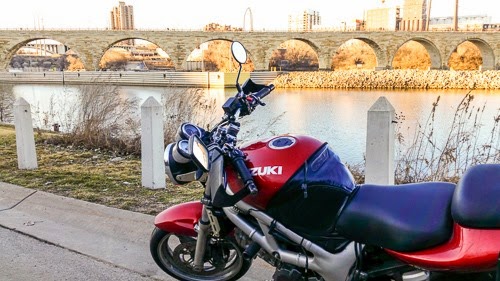 This time we rode around Minneapolis and the Mississippi River. I really enjoy riding by the river and wanted to share some of that with Laura. Before we left, I asked her which bike she wanted to ride on. She thought about it for a few seconds and then picked the SV650. I’m sure the other bikes were jealous. The poor Ural is still stuck in the corner taking up space. 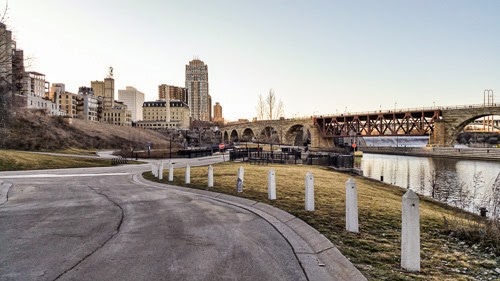 Our first picture stop was the park just south of the stone arch bridge. The bridge is a beautiful pedestrian bridge which was a former railroad bridge. It was first built in 1883. Looking back on my old posts, I wrote about finding this park for Ural National Rally Day 2011. I also wrote about it when Keith came up from St. Louis for a visit; check it out here. Wow, time flies. 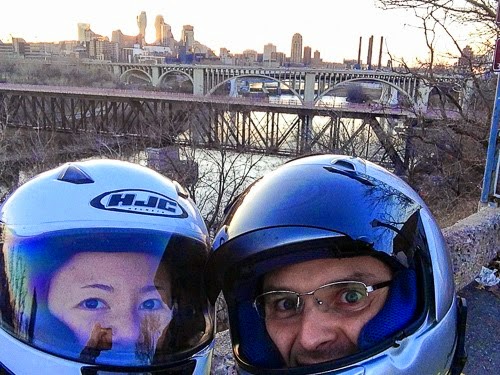 We looped around enjoying the winding road along the river as far south as Ford Parkway, and then crossed over to the Saint Paul side. The roads on the Saint Paul side were not as smooth as Minneapolis. At one point we were both making noises for how rough and bumpy it was. It was almost washboard bad even though it was paved.

In our exploration, we found this little parking space with a great view of downtown Minneapolis. It’s just north of Washington Ave, but south of dinkytown. I’m sure I’ve ridden past this spot at least once before, but I don’t remember stopping to enjoy this view before this ride.

We both really enjoyed the ride and the sights. Here’s hoping we can squeeze another ride in soon.