Ural to the Rescue 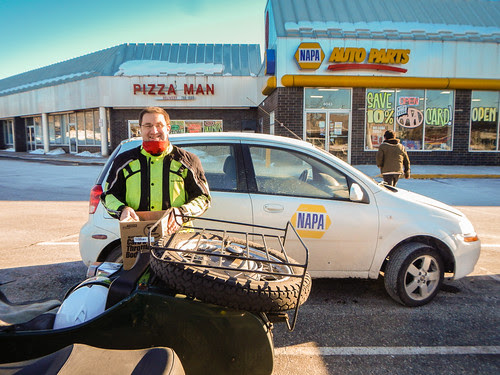 My friend John, seen above, started having car trouble the other day on his way to work. He managed to limp it over to my house, and into the garage. His alternator appeared to be failing. Fortunately, I have a well stocked garage from working on my own bikes and occasionally my wife’s car. In the warm, well-lit space, he was able to remove the alternator. The next problem was to find out who had one.

He said he’d call a mutual friend to give him a ride. I offered up the Ural as an alternative to waiting. Ural to the rescue! He’s about my size, so he fit in my older riding gear. My wife’s old helmet fit him perfectly as well. John rides a VFR and has been riding since he was a kid. His coldest riding day on the VFR was 11F. He almost broke that today with the Ural, but it was only 13F.

We piled into the Ural and rode over to Napa to get a new alternator and have them test the suspected bad one. One we walked in, they asked if we were riding snow mobiles. I have no idea why people in the middle of the city think folks are riding snow mobiles in winter. There isn’t any snow on the roads. They confirmed the alternator was bad, and during the test we could smell a slight burning smell.

About to leave Napa, we got UDF’d, Ural delay factor, by the guy walking in the background of the photo. All the usual questions: “what is it”, “where’s it from”, “where’d ya get it”, “how old is it”, “No really, how old is it”, etc, etc. Nice to see John getting the full Ural experience.

On the way home, he experienced one of my favorite Ural experiences. A woman out jogging with her dogs gave a huge way and a big smile. We waved back in unison.

John enjoyed his ride in the Ural. He said it was just like riding in a car. With the new alternator back in place, his Jeep was working great. It was a fun way to help a friend.