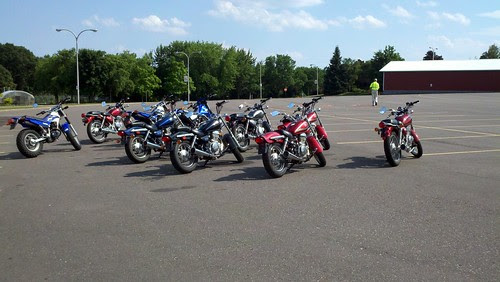 I was at the range (also known as a parking lot) last night practicing some MSF BRC exercises. I had a class today. I wanted to polish a couple of them up, so I could show the students the “perfect” demo. I had a nice time practicing with the training bikes even though it was 90F!

“Fred” was drooling on my WR250R quite a bit, so I offered him a ride. I worked with him last month. “Fred” is a good coach. He didn’t take much persuading and went to grab his gear. He was a little taken back by the seat height at 35”. I can barely reach the ground now that I’ve lowered it from the stock 37 inches! He had a fun time riding it and suggested we use them for student bikes. While it does meet the spec, I think it has a bit too much power and is too expensive for the program to purchase. How sad. It is such a fun bike.

By this time, the first coach, “Bob”, wanted a ride too. I had only just met him, but in the spirit of trying to be more generous, I said “sure”. He hesitated about putting on his motorcycle coat because of the heat. Fortunately, he did.

While I was talking to “Fred”, “Bob” was tearing around the parking lot. The WR250R does a good job brining out the inner-hooligan, even for a Goldwing rider like “Bob”.

Very disappointingly, there was a loud crash from the parking lot, and the WR250R’s tip-over sensor engaged and turned off the engine. It was quiet with just the light breeze blowing the trees. “Fred” used some interesting language I won’t repeat while I started the long walk to the other side of the parking lot. “Bob” sprang to his feet as I called out to ask if he was ok. He said he was. 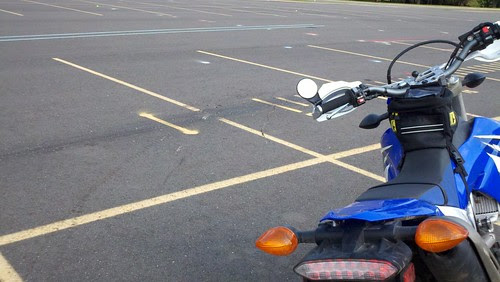 He picked the bike up before I could snap a photo. He tore a small hole in his coat, and later we found he had a dime-sized bloody elbow. The WR has knobby tires, so it tends to slide a bit on hot pavement when ridden rough. It appeared he had the bike leaned over way to far with way too much throttle as the rear tire crossed this line of paint. You can see the tire marks from left to right. 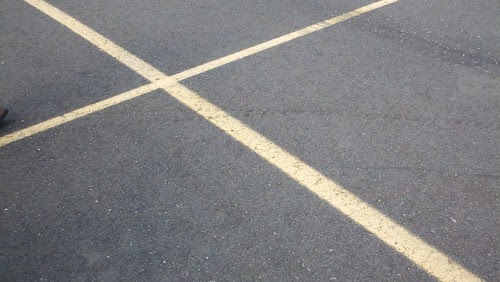 The rear tire slid out, and the motorcycle fell onto the right side. It then slid across the pavement. 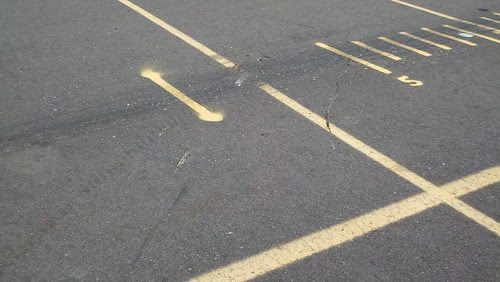 The long gouge is from the handlebar – about five feet. 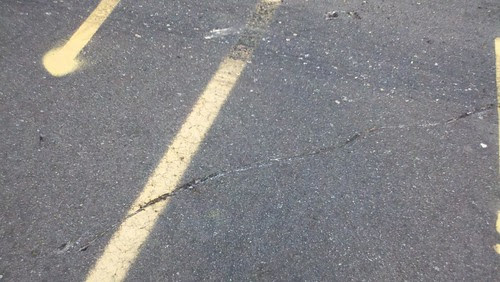 The bottom mark is from the footpeg, and the little one at the top of the pic is from the axle nut. 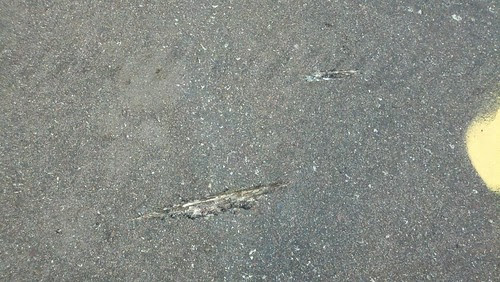 The right handguard plastic was ground down slightly. The mirror folded out of the way. The handguard protected his hand, the brake lever, and the front turn signal. 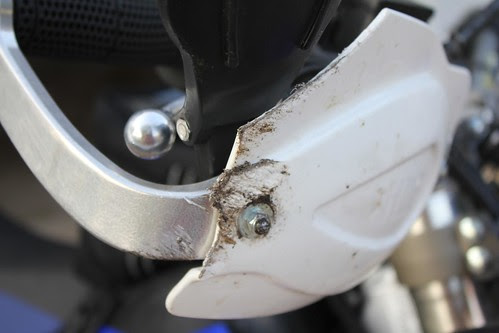 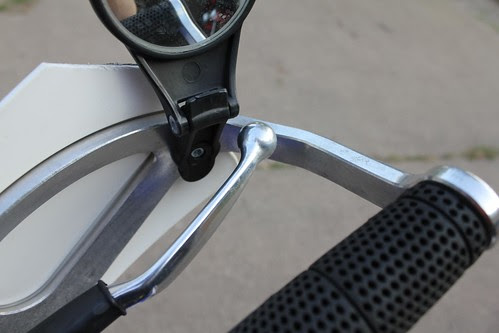 I didn’t notice until I got home, but the bars also slid in the top clamp about 1/8” inch. The top clamp also seems a bit twisted. 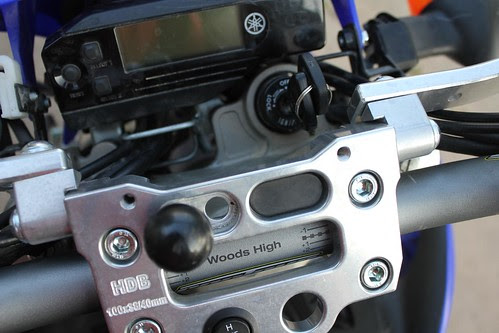 The plastic muffler guard sustained this small rash here. It also did a nice job protecting the rear turn signal from the ground. 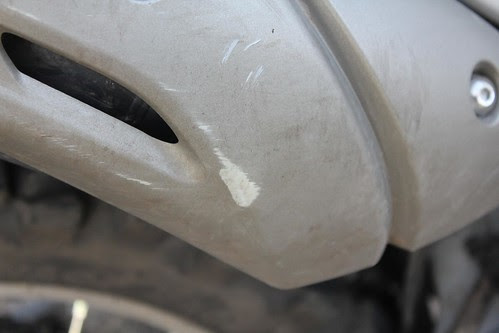 Which I don’t mind so much, as I’ve already done this to the front plastic by dropping it on rocks and trees. I’ve never crashed the WR on pavement though. 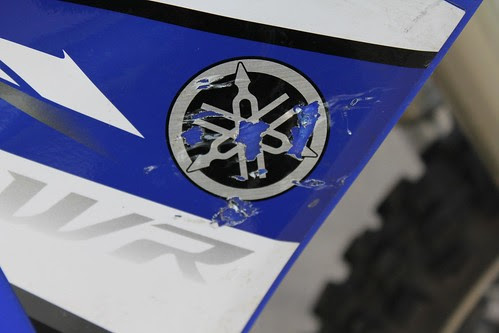 After about 45 minutes of fiddling, the handguards and bars were back to their normal position. 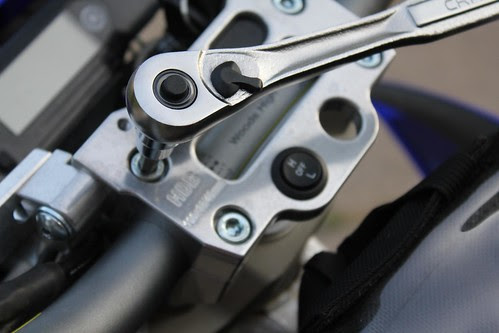 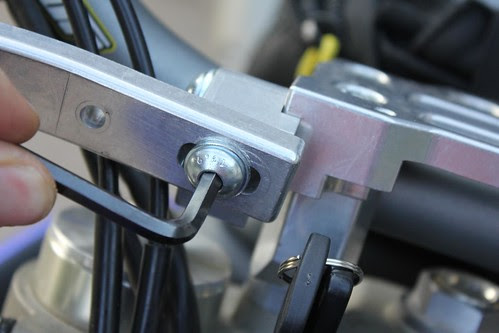 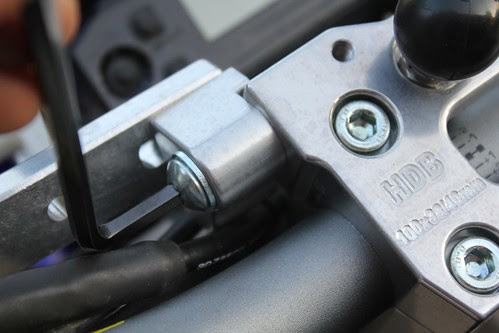 I still need to adjust the top clamp as there is a slight (5-10 degrees) of twist on the bars. I hope they aren’t actually bent. “Bob” offered to pay for any damage which I still need to figure out. I declined his offer to ride his Gold Wing.

I give this battle to the WR which sustained far less damage than the parking lot. WR 1, Pavement 0.

PS: My BRC this morning went very well. The students were a fun bunch! Second half tomorrow.