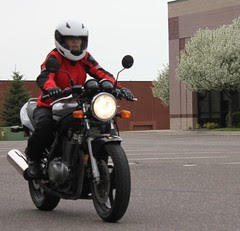 A week ago, my wife completed her search for a new bike. She’s been looking since January for a new bike to replace her GZ250. She’s looked at Triumphs, BMWs, Suzukis, Harleys, Ducatis, Yamahas, Moto Guzzis, and Hondas.

She test rode a number of bikes. She tried a V-Star 650. The seat height was great, but the heavy 550lbs was too much for her to pull off the side stand as was the Harley. She tried a G650GS, but the seat was too high even at it’s lowest setting. The Triumph and the Ducatis fit, but were much too expensive. She rode a SV650 and also found it a bit top heavy. Finally, she settled on a GS500F.

Last week she purchased her second bike: a 2007 GS500F, but without the F (it came with the bike, but is now in the attic). The previous owner had removed the fairing and make it a naked bike which is her favorite style. I’m partial to it myself. 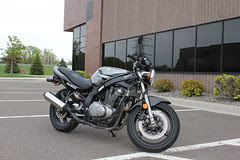 The GS500 getting acquainted with the rest of the fleet. 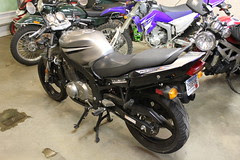 The previous owner also removed the stock bars and replaced them with some pretty aggressive sport bars. They will be replaced this coming week with a set of BikeMaster Daytona bars which have a much more upright position. In the meantime, we’ve both been having fun riding it!

Here she’s practicing in a parking lot getting used to the bike and the new seating position. She’s still adjusting to her feet not being in front of her.

She’s practicing some quick stops here. The dual disc brakes of the GS500 are much stronger than the GZ250’s disc and drum combo. 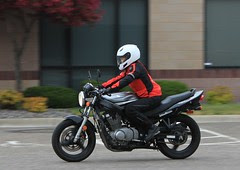 She let me ride it for a bit too! 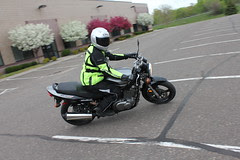 Here I’m demonstrating how to make a tight turn by turning my head and moving my butt off the seat. 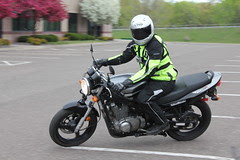 I enjoy practicing the slow speed maneuvers as I think those are the most challenging. At speed, the bike will hold itself up. When going slow, you have to provide more of the balance by shifting weight and operating the controls smoothly.

I’m glad the search is over, and we can get back to riding together. The GZ250 was fun, and it a great learning bike. However, it was frustrating because it couldn’t keep up with 70MPH speed limits on the highway and on large hills (river bluffs) it would slow down to 50MPH. I think she’s going to really enjoy her new bike, and it will be a great stepping stone to improve her skills.

On May 15th, we are taking an advanced riding course together. I hope the course will give her the confidence it gave me last year, so she can really enjoy our big trip in August.