My Super9 scooter didn’t want to start last week because the battery was dead. I put it on the charger and forgot about it. I tried to start it a few days ago and it would turn over, but not start. I put it back and took the WR250R instead.

Last night, I finally had some time to work on it. It’s needed some attention and hasn’t been given much this year. I took off the air filter and cleaned it. Instead of bright red it was a quite dark. 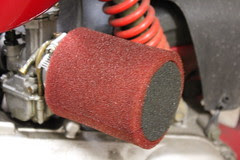 I checked the tires and found them a bit low. I put the front back up to 25psi and the rear back up to 28.5psi.
The gas tank was only half full, so I decided to fill the scooter up. My Super9 is a two-stroke which means it needs the oil mixed into the gas. Normally, this is done automatically by the scooter, but since mine had been modded, it needs to be mixed by hand. That’s when I saw I was out of premix. Time to make more!

I went to the gas station and filled up my container with 2 gallons of gas. Then I grabbed my two stroke oil: 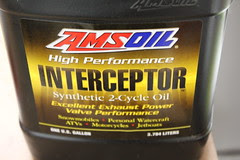 I found the mark on the mixing container that said 2 gallons: 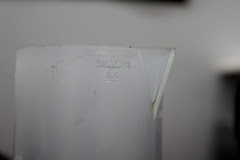 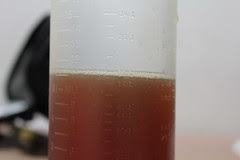 This mixing container takes all of the guess work out of mixing. 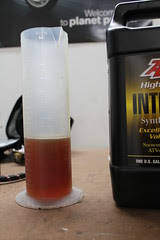 I also decided to pop the seat off and look at the spark plug. I found the plug NGK BRP6HS: It wasn’t looking great, so I thought I should get a new one for 2010. I took the advice of some people on the Super9 yahoo group and bought a NGK BR9EIX which was highly recommended for modified engines such as mine. 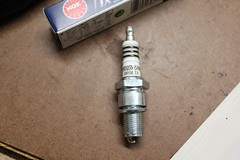 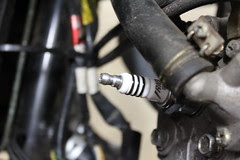 The spark plug boot wouldn’t fit, so I unscrewed the cap on the end. 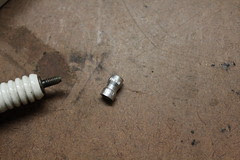 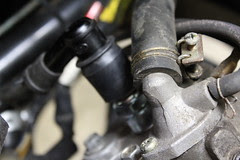 When I tried to start the scooter, it would just click. I tried a few times and then checked the battery again. It was good, so I tried to start it again. Now it was turning over, but still not starting. I pulled the plug to take a look. 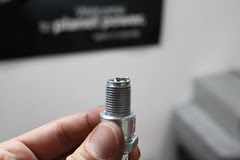 It isn’t supposed to be flat like that… Below is the problem. The old plug on the left and the new on the right. There goes $10 because I wasn’t paying attention! 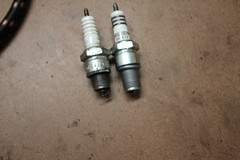 The big problem is the new plug is 1/4” longer than the old. the H in the name = 1/2” and the E = 3/4” on the threads. It was too far into the engine and the piston flattened it when I tried to start it. The heat range it likely all wrong too. I’m going to find a cheaper BRP6HS and a BRP8HS to play with. The stock plug is an “8” and the modders usually go for a “9”.

Below is a chart for decoding the NGK spark plug numbers and letters: 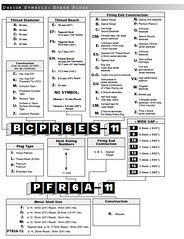 No local stores had my plug in stock, and being impatient and not wanting to wait a few days for Amazon to send me one, I took a wire brush to the tip of the spark plug. I cleaned it up as best as I could and put it back into the scooter with little anti-seize.

It’s back to it's violent self and running nicely. I will replace the plug with a new one once it gets here. Hurry up UPS!
Chris at 7:14 AM
Share