As promised here is the crash compilation video from this past weekend’s dirt biking. I am still working on the rest of the video, and then I’ll do a proper post about the Golden Eagle Trail Ride located in the “Zumbro Bottoms” 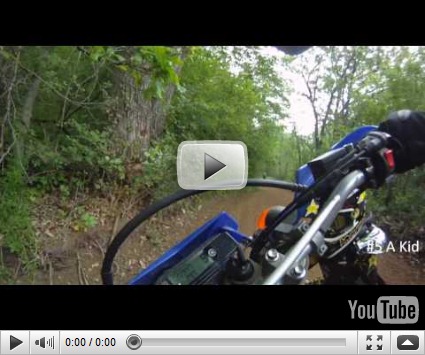 I didn’t think I would be able to attend the Golden Eagle aka Theilman trail ride this weekend. They only do the ride twice a year and the area is normally off limits to motorcycles. It is the best riding in Minnesota.

My trailer plans fell through at the last minute. Fortunately, a friend had room in trailer for my WR250R! Thanks!!

This is what I packed for riding gear and clothes:

and of course electronics:

No T2i on this trip as it will be too dusty and dirty. The GoProHD will be fine, and my little Pentax will cover the rest. I see a crash compilation in my future…

All of the above gear fit into my gear bag:

I put the two one gallon jugs of water in for size. It’s a HUGE bag.

The bike is all gassed up and ready to go. I am also bringing an extra 2.5 gallons. There is about 45 miles of trail where we are going, so 4.5 gallons will be more than enough.

On a different note, I have been overly busy this spring and am way behind in writing my blog and reading others. Sorry!  No internet this weekend, so I am going to get further behind.  I hope to be caught up soon.

My Super9 scooter didn’t want to start last week because the battery was dead. I put it on the charger and forgot about it. I tried to start it a few days ago and it would turn over, but not start. I put it back and took the WR250R instead.

Last night, I finally had some time to work on it. It’s needed some attention and hasn’t been given much this year. I took off the air filter and cleaned it. Instead of bright red it was a quite dark.

I checked the tires and found them a bit low. I put the front back up to 25psi and the rear back up to 28.5psi.
The gas tank was only half full, so I decided to fill the scooter up. My Super9 is a two-stroke which means it needs the oil mixed into the gas. Normally, this is done automatically by the scooter, but since mine had been modded, it needs to be mixed by hand. That’s when I saw I was out of premix. Time to make more!

I went to the gas station and filled up my container with 2 gallons of gas. Then I grabbed my two stroke oil:

I found the mark on the mixing container that said 2 gallons:

This mixing container takes all of the guess work out of mixing.

I also decided to pop the seat off and look at the spark plug. I found the plug NGK BRP6HS:

It wasn’t looking great, so I thought I should get a new one for 2010. I took the advice of some people on the Super9 yahoo group and bought a NGK BR9EIX which was highly recommended for modified engines such as mine.

The spark plug boot wouldn’t fit, so I unscrewed the cap on the end.

When I tried to start the scooter, it would just click. I tried a few times and then checked the battery again. It was good, so I tried to start it again. Now it was turning over, but still not starting. I pulled the plug to take a look.

It isn’t supposed to be flat like that… Below is the problem. The old plug on the left and the new on the right. There goes $10 because I wasn’t paying attention!

The big problem is the new plug is 1/4” longer than the old. the H in the name = 1/2” and the E = 3/4” on the threads. It was too far into the engine and the piston flattened it when I tried to start it. The heat range it likely all wrong too. I’m going to find a cheaper BRP6HS and a BRP8HS to play with. The stock plug is an “8” and the modders usually go for a “9”.

Below is a chart for decoding the NGK spark plug numbers and letters:

No local stores had my plug in stock, and being impatient and not wanting to wait a few days for Amazon to send me one, I took a wire brush to the tip of the spark plug. I cleaned it up as best as I could and put it back into the scooter with little anti-seize.

It’s back to it's violent self and running nicely. I will replace the plug with a new one once it gets here. Hurry up UPS!
Chris at 7:14 AM 3 comments:
Share

Sunday, we took the Ural into Carlos Avery Wildlife Management Area. I wrote about it before on: Exploring Dead Ends on a WR250R and in August of 2009. Watch one of the videos below in HD to see the above photo in action!

We were both very exhausted from our advanced riding class, so we though the Ural would be fun. (More on that soon. Uploading 400 pictures to flickr takes some time!) The weather was great both Saturday and Sunday! The first two days without rain in the last thirteen. You’d think we’d been transplanted to Seattle or something. On Sunday, the high was 81F!

I wore my new Firstgear mesh coat. My wife bought a new helmet on newenough.com and the coat was on closeout for $30! I couldn’t resist. A mesh coat in 80F is amazing. It felt like I was just wearing my t-shirt.

We arrived at Carlos after a quick ride up I-35W. I always get excited when I see a minimum maintenance road sign. It means fun ahead.

Carlos is normally very sandy, but I didn’t need 2WD at all. It was also surprisingly dry considering how much rain we have had.

We saw a bunch of geese and their babies running across the road. In one case, the goose ran away down the road. You have to see the video for it. I cut it down to about 15 seconds, but we “chased” him for over a minute and a half before it remembered it had wings and flew away.

There is some really amazing scenery up there.

My wife is turning into a great sidecar monkey. She leans into the turns with me making it much easier to enjoy the twisty roads. I’m still working on teaching her to ride the Ural, but she really enjoys just going for a ride.

We were there for about two hours and never rode on the same road twice. Granted, we were only going about 20MPH. The road was quite rough most of the time with large ruts and some wash boarding. We put in almost four hours and 120kms. It was a great ride and we both had a lot of fun.

Enjoy the videos below! They look best in full screen and with 1080p HD if your computer and internet can handle it. 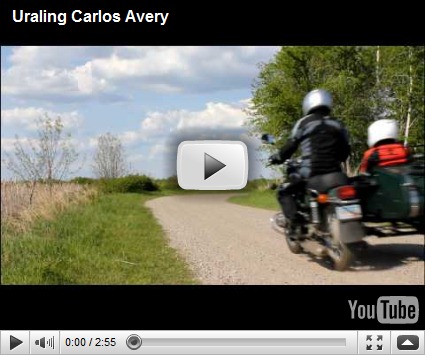