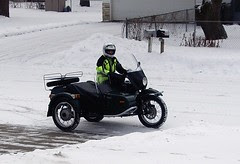 The Ural has been running great since it's first service just over one week ago. The ride today was pretty normal for Minnesota winter: 16F in the morning and 22F on the way home. 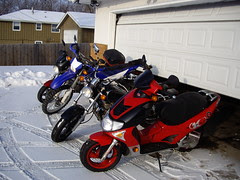 I finally finished winterizing the rest of the bikes in the garage this weekend. It was good to finally finish the process. I just needed to put some marine stabil in the tanks and let them run for a bit to get it into the carbs and injectors. It also reminded me how much work I have to do.

The WR250R needs new handle bars (they are really bent), new levers (bent), and new handguards (bent!). I guess I need to quit crashing in the forest, but then my friends wouldn’t get as much entertainment.

The SV650 needs a carb sync and the valves checked out. I was nervous about doing both, but after watching the Ural service videos, it doesn't seem that tough. I also want to replace the turn signals and brake lights on the SV. The previous owner put tiny little turns signals on. They look good, but no one can see them during the day. I should also flush all the radiators and change all the plugs to get the bikes ready for an early spring ride.

Since I purchased the Ural, I have been reading "Driving a Sidecar Outfit" by David Hough. It has helped me understand some of the unique sidecar dynamics. I think riding a sidecar is much more work than a regular bike, even a dirt bike.

There are some excerpts from the book on CycleSideCar.com. David also wrote one of my favorite motorcycle books: Proficient Motorcycling: The Ultimate Guide to Riding Well.