I woke up early today and got a ride out to the local Ural dealer in Wisconsin (St. Croix Ural). It’s about an hour from my house located NE of Somerset. I was interested in the 2008 Patrol below. It was the demo model and was discounted over $1100 from new. 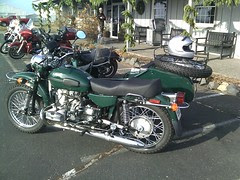 After we arrived, the owner Dell came out showed me how it worked and let us take a ride around the parking lot. The sidecar controls are similar to a motorcycle, but the handling is completely different. I practiced many figure eights and general turns and shifting. Once I was comfortable, we took off down the road. It was great fun, but I need a lot more practice.

I was really impressed they let me ride the motorcycle first. Nearly every other motorcycle dealer I’ve visited in the area will not let you ride the bikes except for “demo days” which are usually once or twice a year. If you missed it, tough luck!

While we waiting for the paperwork to get sorted I started reading the Ural owners manual. It’s the best owner’s manual for a bike I’ve ever seen. The Ural also comes with a book on how to operate a sidecar which I also started reading.

After waiting a couple of hours, Dell let us know that their bank would not provide a loan for a new ‘08. Dell then offered to sell me a 2009 Ural Patrol for the same price he had quoted me on the ‘08. He even said he would deliver it in a few days for free since it was still in a crate. The pic of my new Patrol is below: 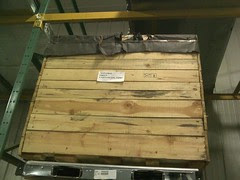 In addition to the Patrol, I negotiated and got the windshield and leg fairings free. Dell assured me this bike would take anything a Minnesota winter could dish out, and with the upgraded alternator it can run all my heated gear. It also comes with a two year unlimited mile warranty. The unlimited part sounds like a challenge to me.