I was able to ride the scooter to work today. It was dark and 24F! I think this is my new record for the coldest riding temp. I wore the Phantom suit again along with my mountain hardware winter coat underneath. I doubled up on socks and wore my tourmaster winter gloves. I was quite warm except for my hands. 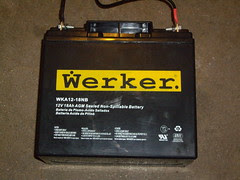 On the way home I stopped at Batteries plus and picked up an AGM Sealed 12v 18ah battery to power my electric gloves. I tested it and it worked great. I should be able to get more than two running hours out of the battery if I run my heated vest and my gloves. With the cold temps, I think I should be fine if I charge it every night. Initially, I will just run with the electric gloves since it's a bit of a hassle using heated gear with the Phantom suit. There is no easy way to get the power cable and control cables out of the suit. The recommendation from Olympia is to cut a hole in one of the waterproof pockets which I do not want to do.


I've been talking to the owner of Olympia Motorsports, Kevin, about the leaky suit and he suggested I spray it with scotch guard to make the front vent zippers more waterproof. I'm a bit hesitant to do this since I have similar vents on my tourmaster coat, but I've never had to spray it and it is more waterproof. I'm also a bit confused because on the Phantom gear page, the second bullet is waterproof. A co-worker has the same suit and his leaks in the same way. I'm wondering if there was a defective batch since there seem to be a large group of happy owners on ADV and other sites.
Chris at 7:04 PM
Share