I'm writing this post to encourage and inspire you to wear your safety gear when riding your motorcycle. I recently crashed and wearing my gear saved my life and prevented serious injury. Dont get me wrong, I'm still hurt. However, I'm at home sleeping in my own bed versus being in the hospital. There are no broken bones, just lots of bruises and the mental scars of the event. 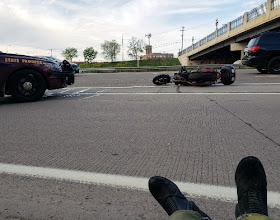 It was a lovely spring day. The sun was shining and warm. It was well into shorts and sandles weather in the mid 80s. I was excited for tasty home cooked meal at my girlfriend's house. I had stayed a little late at work and missed most of rush hour.
I carefully zipped up my roadcrafter over my shorts and t-shirt after securing my boots. I attached the tether from my helite vest to my sv650. I fastened my arai helmet and strapped my gauntlet gloves on. The SV purred to life as I left the office lot.
I quickly entered onto I94e from the downtown St Paul entrance ramp and looked for a place to merge. A light colored sedan came from the left, dive bombing the upcoming exit ramp from the far left lane, crossing over three lanes. I saw it coming and quickly started to brake. I barely missed the rear bumper of the car as it continued to exit never knowing I was there. I missed it by mere inches.
The bumper was the last thing I remember seeing before the world spun around and around. "Dont target fixate" I tell my students, "look where you want to go!" I was looking down and that's where I went.
I crashed in the right lane of I94e. I couldn't move at first. The airbag deployed very tightly around me, protecting me. I took a moment to take stock of my situation. The bike was leaking gasoline, radiator fluid and oil. I turned off the bike. "I dont want to start on fire I thought." Which quickly turned to "get out of the road!" My right leg was pinned under the bike as I lay in traffic. I couldn't get up nor could I get free. Deep breath and keep trying. I didnt want to get run over as traffic was flowing freely when I went down. I tried harder and managed to pull my leg free. I tried to stand and felt horrible pain in my right leg, so I hopped as fast as I could to the shoulder and flopped down. 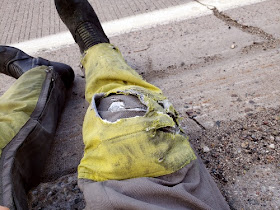 By this time, others had stopped and came to help. "Are you ok they asked?" I was dazed. I replied "I dont know, I hurt all over." I was breathing really quickly. I forced my self to breathe slower. I took off the airbag vest which was bear hugging me. Then fumbled with my gloves and helmet. Someone was asking me to look at him, so I did. I saw someone else talking to 911 on their cellphone as I heard sirens coming. 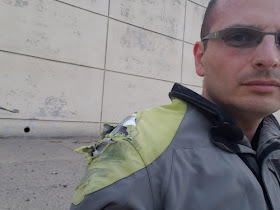 An off duty trooper saw the bike as he drove from i35e south onto i94e. He spun around and drove the wrong way, against traffic to get to me. I later learned he was on his way to take his pregnant wife to the hospital and had seen a motorcyclist die a week earlier. He was worried I would be next. 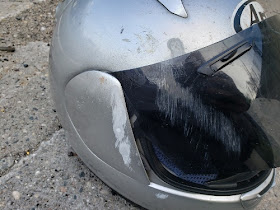 When the trooper arrived, the others left. He took my license and started asking me questions. I tried to explain what happened. I was still a bit dazed. Then there was firefighters and an ambulance. I asked for some ice for my leg and left hand. The trooper talked into his radio calling it in. He told me he didnt believe my story and that his partner had seen me doing wheelies further back.
I took the rest of my gear off. The EMTs examined me while the firefighters admired my gear. The EMT asked if I had hit my head, I replied "nope!" Then we both looked at the road rash across my helmet and I updated my statement to "I guess I did hit my head." The EMTs concluded unlikely to have broken bones and strapped some ice packs on me. They all remarked I was lucky to be alive and that I had good gear. Then they left.
It was just me, the trooper and a highway helper at that point. The trooper said we should get my bike out of traffic and made me get up to help him and the helper. I hobbled after them and watched them lift the bike up while I fiddled with the shifter to get it back into neutral. Then they backed it onto the shoulder next to my gear.
I have towing as part of my America Motorcycle Association membership. I tried to find the number in my phone. I couldn't figure it out. I recognized I wasnt thinking clearly earlier and took pictures to try and remember what had happened. I called my girlfriend and asked her to come get me. Then I called another friend to come get my bike with a trailer. Both quickly said yes and came to my rescue.
The trooper asked me to sit in the back of his car as it was safer. I agreed. I saw him typing on his computer to someone that he didnt believe me and that I made the story up about the other car. I was gutted and angry. I stayed silent. Getting mad at him wouldn't help anything. How could he not believe me?!
Another trooper came and they walked over to my motorcycle to talk. They chatted for a while. I kept holding my ice packs. I was up to three and out of hands and straps to hold the fourth. My original walked around to my side of the car. I had the rear door open and was trying to stay focused on my cold packs. He said the other trooper confirmed my gear and bike didnt match the other rider. He then surprised me by apologizing. After that, he became much nicer offering me some advil and water. I was grateful he was mature enough to admit his mistake! I'm also happy that I didnt argue with him earlier which would have probably made things worse.
We chatted about his soon to be fatherhood while we waiting for my ride. My friend got there first with the trailer. The trooper helped him load the bike and helped me pick up my gear and place it in the back of the truck. I wished him good luck and hope that he is a proud father of his first child now. He thanked me for wearing gear and left. 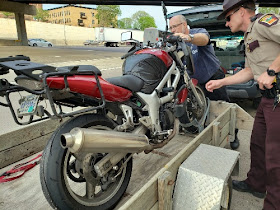 My friend drove us off the freeway where we met up with my girlfriend and then we drove to my house. 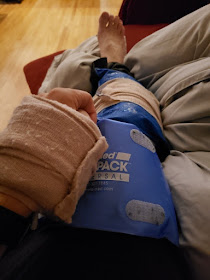 I few days later went to the doctor for xrays and to confirm my suspicions on my injuries. Contusions on my left hand, right shoulder, right hip, right knee, calf and ankle. My mind keeps replying what happened and trying to sort it out. I'm also struggling with moving so slowly and coming to terms with what could have been my end. I'm not sure on the condition of the bike. I dont want to look at it yet. I want to focus on healing my mind and body first. The gear and bike are easy to fix with a little money. The other two take some work. I'm grateful to be alive.
Please wear safety gear while riding. Take some time to give your loved ones a hug and to let them know you care.
Epilogue/FAQ: I will keep riding. Not sure what's wrong with the bike yet. Going to buy a new aerostich, helite will repair the airbag vest. Hunting for a new helmet and boots neither are currently being made anymore. It was therapeutic to write this post.
Everyday Riding at 4:22 PM 9 comments:
Share

And then there were three 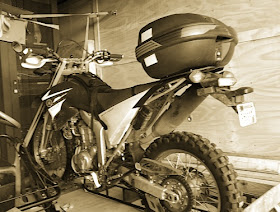 Adios WR250R! When I bought this bike new, I had dreams of riding it to far away places. Maybe do the TMAT or ride to Alaska or the far end of South America. Life got in the way and those dreams started to fade.
I had a lot of fun with it while I did have it, but I barely rode the WR250R last year. It spent some time with a friend whose motorcycle had died. It helped him ride while he fixed his bike and I secretly hoped he would fall in love with it and buy it. He didn't. He is more of a sportbike guy.
Enter my friend visiting from Texas! He has recently retired early to homestead in West Texas. He has acres of dirt and has been talking about getting a street legal dirt bike. Wow! I had a deal for him :) 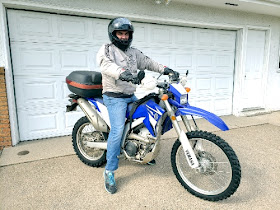 We concluded the negotiations with cherry chocolate chip ice cream. I feel like every vehicle sale should conclude in ice cream or another delicious treat. I'm glad the WR is going to a good home. Enjoy the ride Joe!
PS: the remaining three are: sv650,dl650,super9.
PPS: I plan to buy an electric bicycle and then invest the rest.
Everyday Riding at 6:00 AM 8 comments:
Share
‹
›
Home
View web version