Stuck Axle on Ural and a Hefty Repair Bill Inbound 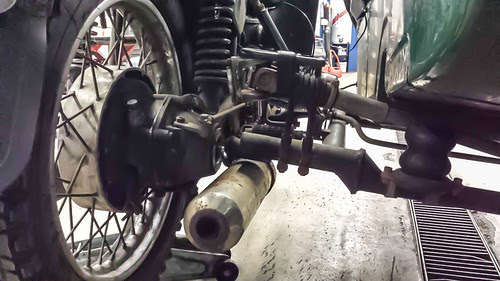 With the recent snow, I thought it would be a good time to put on my new tires. I was looking forward to seeing how they would do in the snow. When I got home, I eagerly went to work. It would be simple. Just put the Ural up on the center stand, remove the castle nut and cotter pin, loosen the pinch bolt, pull the axle out, and take the wheel off. It should be a ten minute job, but 90 minutes later the wheel was still on and I was a tired sweaty mess.

The axle was stuck. It wouldn’t come out. I sprayed it with various lubricants. I tugged on it. I whacked it with a BFH (big hammer). It only moved about 1/8 of an inch. Damn. I even had to get my phone out to watch a video on YouTube to make sure I wasn’t crazy on how easy it should be. Yup, just pull it out easily. Ugh.

Yesterday, I took it to the local shop. I didn’t think it’d make it 100 miles to Scrambler. I figured they would be able to get it off easily and put my tire on. I was shocked they wanted $126 to swap a tire and I was bringing the tire! 1.5 hours by their shop rate. Arg.

They ran into the same problem I did, but they took the 2WD u-joints apart so they could whack it with a bigger hammer than I used. It moved about an inch.

The mechanic also pointed out my sidecar u-joint was shot. I said “I don’t see what’s wrong.” He grabbed it and gave it a shake and it moved around a lot. “It isn’t supposed to move like this" he said. Oh…

They didn’t have an axle in stock, so they were going to take one from a new unit to get me back on the road unit while they order a replacement. The u-joints they said they could get from Napa. I get my air filters there too. It’s from a tractor.

They finally got the axle out and the wheel off. The wheel bearing is shot as well which I had suspected. Time to use the spare wheel. I should hopefully get the Ural back later today. *fingers crossed*

The repair looks like: new rear tire, new tube, new rear axle, two new u-joints on 2wd axle, and a new wheel bearing. Yikes! I am not looking forward to the bill. I hope this is the extent of my mechanical drama this winter. It’ll be my fifth winter of riding in the snow on the Ural! I hope it means I’ll have some good luck mechanically.