I'd love to see more signs like this 'Motorcycle Parking Only'. It isn't closer to the building, but at the other end of the lot away from the door. It also has a nice concrete pad to avoid sidestand damage to the asphalt too. It is a welcomed sign compared to the 'No motorcycles allowed' signs.

Do you have motorcycle parking at your location? 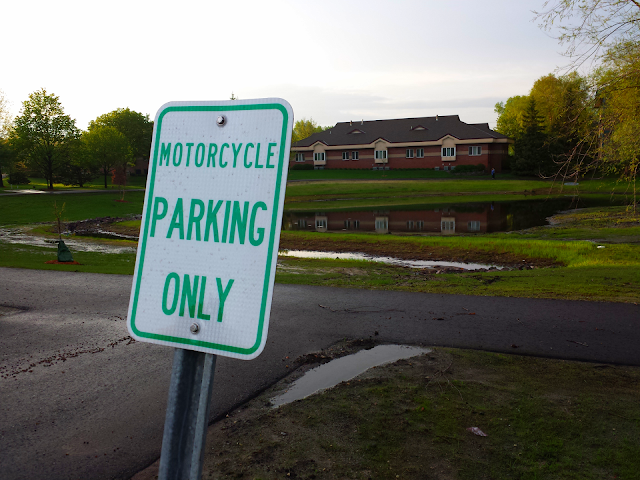 Under cloudy skies and temps barely reaching 40F, TC_DualSport had their annual tech day yesterday. It’s a day for riders to get together early in the Spring to get help with some maintenance tasks from the large to the small.

Due to the weather, only about 15 bikes showed up. I saw six in various states of disassemble throughout the morning and early afternoon. Some working on small tasks like tires while others were replacing gaskets in the engine.

The bikes weren’t limited to just dualsports either. There was a cruiser getting a new rear tire, and a fun looking Ninja250 joining in.

The event is hosted by my friend Paul. He is gracious enough to open his garage and well stocked tool chest to other riders. He is an experienced moto mechanic. He’s helped me in the past with tires and sprockets. Thanks for hosting Paul!

It was a good time chatting with friends about rides and motorcycles. The only thing better would have been to go for a ride. I rode my WR250R to the event, and was happily surprised to see another one show up later. It’s owned by a guy named Tom who is planning to ride it to Alaska later this year. Sounds like a fun trip to me. It was fun to compare ownership notes on our WRs.

Tom Day from “Geezer with a Grudge” was also at the event. He rode his VStrom 650. He has a WR250X, so he joined in on our WR ownership comparison. We all decided the WR is an awesome little bike.

Tom was also kind enough to let me take his VStrom out for a short ride. I quickly felt very comfortable riding it. He has it very well equipped too with several of the things I’d consider doing: givi rack, custom seat, engine guards, center stand, skid plate, handguards, outlets, etc. Wow. I want one even more now.