And Then There Were Four. Goodbye BMW

Today, marks the end of an affair with a bike I wanted to like, but it just didn’t click for me. I sold my BMW R1150GS. I spent too much time and money trying to make the GS my bike rather than just accepting it wasn’t a bike for me.

It should have been a clue, that it wasn’t for me when I didn’t update my blog banner to include it. I had it for two years, and now it is going to a better home where it will be ridden much more. In my garage it spent most of its time keeping the other GS (GS500) company. I enjoyed the SV650 so much more.

Back on the SV and Some BRC Practice

At the risk of jinxing it, Spring looks like it might be here! It was almost 50F yesterday, and I was able to ride my SV650 again. yay!

After work, I met up with another RiderCoach, and we set about practicing exercises for the BRC (Basic Rider Course) we are teaching this weekend. It was a fun time on two wheels. The two hours flew by. The forecast called for strong rain. The clouds looked threatening, but we managed to stay dry.

Our main training bikes this year: TU250X (below front) and a TW200 (below rear). There might have been a DR200 hiding in the back of the trailer too. The main bike looks to be the TU250X. They finally replaced all of the GZ250s.

If the forecast is correct, it might be 70F tomorrow. By the same forecast, it might also snow again next week. Here’s hoping for real Spring weather as we ride into May.

BTW: So nice to be back on two wheels!!

The snow melted over the weekend, and we got to see a touch of green grass. It is snowing heavily again as I type this. We might get eight inches and further north over 16!

Skipped Summer. Back To Winter

It appears we have skipped summer and have gone back to winter. It's hard to believe I was riding the SV last week with all the snow on the ground today.

It is snowing quite hard. We don't normally get snow this late in the season or for this long for that matter. There is about 3-5 inches of slushy heavy snow out there right now. I had a fun time riding home. The Ural handled it easily.

I am ready for spring!

The last few days of riding the SV has been great. The Ural's unique services were required this morning. It is predicted we will get a total of 5-8 inches of snow today.

When I left, there was one inch of ice and slush covered by a very dense two inches or more of snow. I tried 1wd, and got stuck immediately. After I engaged 2wd by locking in the sidecar wheel, I was moving normally again.

I took the scenic way ton work, but there was so much snow falling visibility was very low. The camera lens was coated in only a half mile. The thunder and lightning during the ride added to the atmosphere. The ride home should prove interesting. 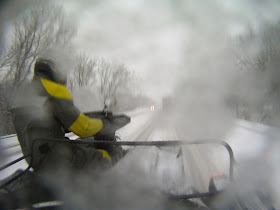 Today, was the first MinneADV swap meet, and it was a success. The weather cooperated as the event was rain-free even though the forecast was 90% rain when I looked the night before.

Selling was free, so there was a good mix of sellers and buyers. I arrived just before the 9am start and was surprised to see how many people were already set up. Most of the activity was concentrated in the first 45 minutes and the last 45 minutes.

I hauled all my stuff to sell on the Ural including a little table to display it on. Throughout the day about five others showed up on bikes. I think most people drove so they could haul stuff.

My stash of stuff about mid-way through. That little REI camping table has been very useful. Most of my stuff was gone by 10am. I had a fun time chatting with the other riders there. I did well; I went home with much less than I came with. Success!

This week, I was finally able to start riding two wheels regularly. The mornings were cold, but the afternoons warmer in the 40s and 50s.

I rode the SV every day this week except for Monday. There was a bit too much ice out. 15F was a bit cold to ride without a windshield, so I took the Ural.

It has been great remembering how much fun a motorcycle can be. I'm a bit sad as I write this since it is snowing again. Time to wake the Ural up!
Chris at 4:10 PM 8 comments:
Share

Today, was a great time at Motorcycle First Thursday in Minneapolis. The sky was clear and bright blue. It was one of the warmest days we’ve had so far in the mid 50s. Over 100 motorcycles came out. Perhaps even 200. A good start for so early in the spring, but nothing like the 1000-2000+ we get in the summer.

The smaller crowd was nice. It made it easy to find friends to talk to as well at look at the bikes. The ratio of folks wearing Aerostich gear when I first arrived was surprisingly high.

It was a good mix of bikes. Some cruisers, sportbikes, adventure bikes, and a pile of others. There were even two sidecars.

The most interesting bike for me this month was a Honda GoldWing. Yea, yea. A very common bike, but this one had something on it I had never seen before. The odometer was at 461,636 miles! Impressive! I wish I didn’t have a mortgage payment, so I could have the time to ride that much.

This is a Suzuki VStrom 1000. When I finally sell my 1150GS, I want to bike a VStrom 650. I like how this one is setup. Many of the mods I’d like on a VStrom: bags, bars, plate, and seat. Missing the extra lights though. I’m not sure if I’d get mine in black though.

It was a good night chatting with folks until the sun went down.