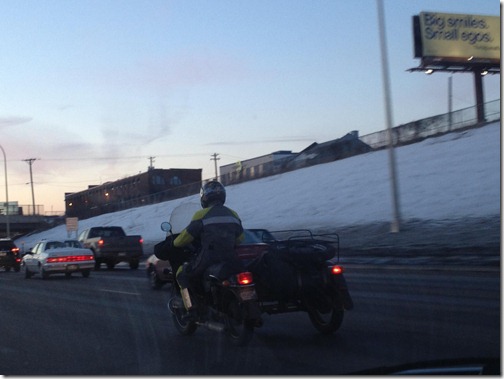 I’ve seen many people taking photos of me this winter. It seems like more than the previous years. How do I notice? The rolled down window and bright flash are usually a good clue. More commonly though, a car comes up behind me at passing speed and then lingers behind me instead of flying past. In the above case, I was focused on traffic and didn’t even notice!

I’ve wondered how long it would take for one of those photos to get posted in a place I could see it. Facebook was the answer. I found the following text and above photo on the Aerostich page after being mentioned a few times by friends. (Thanks Kevin, Mike, John, and Shawn.

The photo was taken by “Dan O’Neal”. Thanks Dan for the kind words! As I’ve written before, I love the simple act of riding my Ural in the winter while going to and from work brings a smile to so many faces. Cool stuff.

This past Thursday was Motorcycle First Thursday at Dulono’s Pizza in Minneapolis. I missed January due to my Malaysia trip, so I was looking forward to seeing some friends. I had also heard that there were no motorcycles in January.

When I arrived on my Ural, the parking lot was covered in ice and snow. It was full of cars, but I managed to squeeze between a car and a truck. One of them was taking up a space and a half. Fortunately, the Ural only needs half a space.

I went inside and had a nice time chatting with friends. Later my friend Jeff appeared on his DRZ400 shown below. He was quite brave to ride so far given the road conditions. The cold is the easy part, but the ice and snow are a bit unforgiving.

Jeff found out the hard way on the way home why I like a sidecar for winter. He crashed on some ice. Both he and the bike were fortunately ok.

This is the final in my three part post on my trip to Malaysia (part1, part2). This one doesn’t have any motorcycle content unlike the first two. It is largely just pictures I like or images that give a sense of the differences between Malaysia and the United States.

One of the first differences I was aware of, thanks to wikitravel, before I left not that it pertains to me, but it sets the tone of the country as conservative.

The sign above reads: [emphasis added] “Malaysia enforces very strict laws against drug trafficking for which upon conviction, may result in capital punishment.” Wow!

A tollbooth along the one freeway in the country. It runs North-South. This one was between Kuala Lumpur and the airport. It looks very similar to ones in the US. The main difference is the booth is on the other side since they drive on the left.

My first glimpse of downtown Kuala Lumpur. The Petronas Twin Towers dominate the skyline. They are the tallest twin towers in the world at 452 meters.

Above is an average street scene in Kuala Lumpur.

In contrast to one further north:

Near the highlands in central Malaysia. I love the look of the mountains in the distance. Unfortunately, we didn’t have time to visit the. We were only able to play tourists one day. The rest of the trip was spent enjoying the company of family.

We played tourists one day and visited the Petronas towers. We got there early to line up and buy our tickets to visit the skybridge and the top. While we waited to go up, we explored the downtown area. If you watched Entrapment you might remember these towers as they were featured prominently in the movie.

Above: A view of the park below from the skyway. The skyway is a double-decker with the employees using the top and the tourists in the bottom.

Above: a view from the top of one tower looking at the other. The KL Tower is in the background.

While we waited to go up to the top of the Petronas towers, we explored the markets in the surrounding area. There were a lot of tourists in the downtown area.

I enjoy a good cup of tea, and Malaysia has some great tea. My favorite is Tae-O which is black tea with a bit of sugar. The common to-go container is shown below: a plastic bag. The tea was awesome. I wish I had some right now. Yum!

The downtown area also had a lot of murals that I enjoyed looking at while we waited for the light rail trains to take us where we needed to go. The colors were very vibrant and the designs distinctly different from common version of the same in the US.

Another common sight were mosques. Islam is the most common religion in Malaysia followed by Buddhism. This was my first experience in a Muslim country and I enjoyed the different voices of the muezzins during the call to prayer five  times a day. Some really were enthusiastic and it almost sounded like singing.

Another very common sight in Malaysia are the lizards. They are only an inch or three long. They squeeze through small spaces and climb on the walls and get into food/water. Saying “lizard” and pointing will make the locals excitedly look around. I had a hard time getting a photo of one. They are quite skittery.

I saw some strange things in Malaysia as well such as the box near the checkout at a grocery store. “Essence of Chicken” umm?! It isn’t chicken broth either, it is some health product taken as a daily pill. eww.

Lots of tasks were completed with manual labor. These guys are building a new train station. I love the guy on the right with his hardhat over his rice hat.

An average fruit market full of tasty fruits, some of which I had never seen before  and always crowded.

One day at lunch we witnessed a march for a fair election. Fortunately, it was peaceful, and the police didn’t have to fight like they did the one before. You can see some of the people wearing masks. 30,000 people marching by while we were eating lunch was an experience.

Down the street, the police assembled in large numbers. I love the tourists casually walking across the closed street.

And finally, no trip to Malaysia or other Asian country could be complete without mentioning the squat toilets. They are the most common toilet around. Toilet paper was not common. Had it been, it would have likely been a soggy mess; the bathrooms were usually quite wet thanks to the hose.

It takes a little practice, but they are very usable. These squat toilets flush which is an upgrade to the ones I was first exposed to when I visited China years ago. Just make sure to use lots of soap when washing your hands! :)

The trip was great. I mean, what’s not to like? I spent a lot of time with my awesome in-laws in a hot tropical climate with 12 hour days. A major upgrade to the frozen, dark, and snowy Minnesota winter. I’m looking forward to our next trip even though I have no idea when it will be. I am hopeful it will be under more happy circumstances.

Check out the full flickr album below along with the first two posts in this series. I hope you enjoyed the photos.

Riding on a Frozen Lake at–13F With Warm Toes

It was another cold winter day in Minnesota, but last night a new piece of gear arrived to keep my toes warm and toasty – Gerbing Heated Socks!

To celebrate the awesome warmth, I went on a pleasure ride this morning making many detours along the way. The most fun was playing on a nearby frozen lake. With the weeks of cold temps, the ice is several feet thick and very smooth. The inch or two of powdery snow on top made it extra fun.

The heated socks are thin like a dress sock, and surprisingly warm. At less than full power, my feat were very warm and toasty even after 20 minutes at freeway speeds. Why didn’t I buy these sooner?? Yea, I won’t use them every day; they aren’t needed. On the subzero days though, they are pure luxury.

For those keeping track, I use a Gerbing heated coat and hotgrips heated grips. I also have gerbing gloves and a tourmaster heated vest, but rarely use them. They the backup set.